As more users are accessing online forms through a mobile device, we’ve added two ways to share a form with mobile users. Each form now comes with it own QR code and short URL, to be found in the Form Publishing Options screen of the form creator. We’ve also made it easier to embed a form on Facebook.

Why Mobile Users Are Important 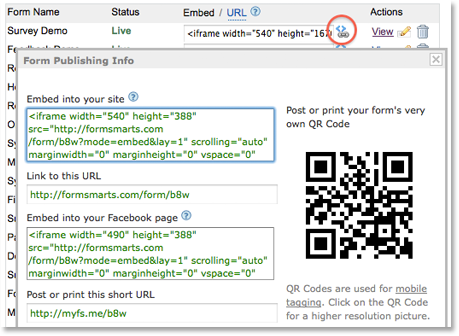 For those cases where distributing a QR code is not practicable and for mobile users who haven’t yet installed a QR code scanner on their phone or don’t know how to use it, we’ve also made all online forms accessible via a short URL such as https://f8s.co/7kb. If this doesn’t fully eliminate typing, it at least makes typing a form URL a less frustrating experience and shows mobile users you do care. And again, it reduces the risk of making an error when typing the URL.

About the Form Builder Blog

The Online Form Builder Blog is published by FormSmarts, a web form service providing all you need to create a form and publish it online in minutes. FormSmarts makes it easy to build a form and embed it on your site. You can then get form submissions by email or store them on FormSmarts and download an Excel report. Learn more about the many other benefits of FormSmarts.